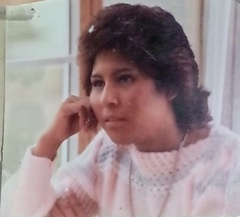 Tama Leann Martinez died December 21, 2015 in Purcell at the age of 49 years 2 months 25 days. Funeral Services are scheduled for 2:00 PM, Thursday, December 24, 2015 at Sanctuary Church. Interment will follow at Hillside Cemetery under the care of Wadley’s Funeral Service.

Tama was born September 27, 1966 in Lawton, Oklahoma to Amon and Anna (Wade) Whitestar. She attended grade school in Marlow, Oklahoma, then the family moved to Stanley, North Dakota, where she graduated in 1985. She married Jorge Martinez in Oklahoma City, on September 28, 1992 and they made their home in Purcell. Tama enjoyed traveling, watching movies and being with her family. She especially loved watching and playing with her grandchildren. Tama was a member of Sanctuary Christian Center in Lexington.

To order memorial trees or send flowers to the family in memory of Tama Martinez, please visit our flower store.