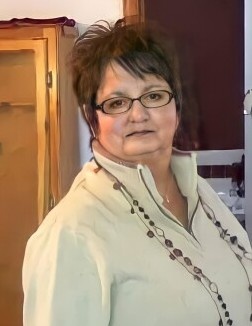 Terri was born February 18, 1960 in Oklahoma City, Oklahoma to Tommie Ray and Dolores Ann “Cissy” (Cody) Huddleston.  She was raised in Oklahoma City before the family moved to Hereford, Texas.  After 3 years in Texas, Tom and Cissy relocated the family to Purcell, where Terri graduated high school in 1978.  Terri continued her education becoming a Certified Nurse Aide and working in home health for years.  She also worked with her father in Oklahoma City and for the Purcell City Hall for a few years, before becoming a dispatcher with Wadley’s EMS.  Terri was caretaker to her parents in their last years.  She loved spending time with her children and grandchildren when she could.  Terri was loyal and social, and turned to Facebook to keep track of her friends after she became ill.  She was obsessed with Fox news, and her dog, Penny.  Terri enjoyed shopping, playing Uno and Yahtzee.  She was quick witted, always with a joke or a little saying.  Terri loved going out to eat, traveling, especially to see family in Colorado, and collection pigs and angels.

Terri is preceded in death by her parents, Tom and Cissy Huddleston.  She is survived by her daughters, Julie Beck and significant other, Dave Thompson of Tulsa, and Elizabeth Staggs and husband, Joel of Purcell; her grandchildren, Noah Allen of Tulsa, Jaxson and Avery Staggs of Purcell; her brother, Mike Huddleston and wife, Jessica of Ada; her nephew, Matthew Huddleston and wife, Leandrea of Ada; her niece, Allison Huddleston; her close friends, Janie, Jackie and Adam Wadley; and numerous cousins, and other family and friends.

A special thank you to Healthback Home Health and Ila Cardona for the years of service and assistance for Terri.

To order memorial trees or send flowers to the family in memory of Terri Margagliano, please visit our flower store.