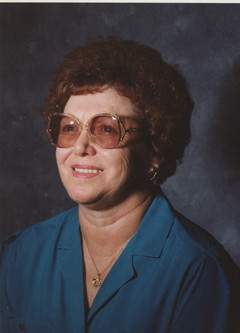 Thresa was born June 13, 1938 in Macomb, Oklahoma to Theodore and Pauline (Drain) Hudgins. She was raised and attended school in the Macomb, St. Louis, Romulus area. Thresa worked as an waitress for many years, even owning her own restaurant for a few years in the Shawnee/Tecumseh area. She also was a local Avon representative. In 1957, Thresa married Jackie Shawn in Shawnee, Oklahoma. They were married for 55 years before Jackie’s passing in 2012. Thresa and Jackie made Purcell their home 36 years ago, moving from Shawnee. Thresa enjoyed playing cards, taking care of her husband and family, and spending time with her grandchildren. She was a big OU and Thunder fan and an excellent cook. She collected salt & pepper shakers, was of the Baptist faith and a member of Union Hill Baptist Church.

To order memorial trees or send flowers to the family in memory of Thresa Shawn, please visit our flower store.