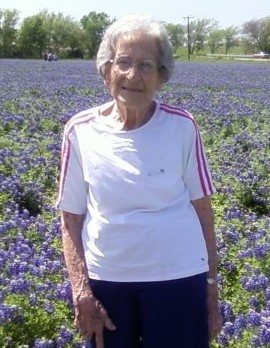 Tommie Verene Fisher died November 25, 2021 in Eddy, Texas at the age of 100 years 1 month 18 days.  Funeral services are scheduled for 11:00 AM, Friday, December 3, 2021 at Wadley’s Funeral Chapel.  Interment will follow at Noble IOOF Cemetery, entrusted to the care of Wadley’s Funeral Service.

Tommie was born October 7, 1921 in Floydada, Texas to Glenn Davis and Docia Vera (Barham) Denison.  Tommie was raised in Texas, and enjoyed crocheting, going to garage sales, gardening, and cooking.  She married Henry Freemon Dye, and they had 7 children.  After Henry’s passing, Tommie later married Bob Fisher, and they had 1 child.   As her children grew up, she was their biggest cheerleader, encourager, and guardian.  Tommie loved spending time with all of her family, enjoying a good fish fry, or other family function.

To order memorial trees or send flowers to the family in memory of Tommie Fisher, please visit our flower store.