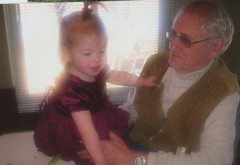 Val was born February 10, 1934 to Charlie and Alta (King) Potter in Stratford, Oklahoma. He was raised in Stratford, graduating school around 1951. Val enjoyed woodworking, carpentry and could build anything. He loved spending time with his family and friends. Val also enjoyed cooking, going fishing, dancing and helping people. He was a kind and generous man. Val owned and operated Val’s Smokehouse in Purcell for many years and retired in 2012. He was baptised into the General Assembly and Church of the First Born in 1976.

To order memorial trees or send flowers to the family in memory of Valton Potter, please visit our flower store.