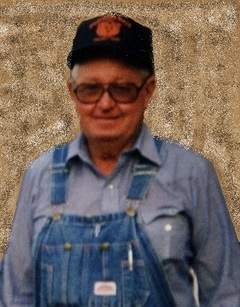 Virgil Royce Larman died January 4, 2016 in Wanette, Oklahoma at the age of 81 years 5 months 8 days. Services are scheduled for 2:00 PM, Saturday, January 9, 2016 at the Wanette Cemetery Pavilion under the care of Wadley’s Funeral Service.

Royce was born July 27, 1934 in Byars, Oklahoma to Hurshel Otto and Uda Faye (Wilson) Larman. He was raised in Byars/Wanette area, attending school at Byars, Trousdale and Wanette. Royce was inducted into the United States Army on January 27, 1954 proudly serving until being honorably discharged on January 5, 1956. He married Rachella Fugett on January 5, 1957, they were married for 33 years when Rachella passed in 1990. Royce married Linda Willars in July 1992 and were married for 16 years when Linda passed in 2008. Royce worked as a Sheet Metal Worker for many years retiring at the age of 55 to pursue his passion of farming. He loved spending time with his family and his grandchildren. He also enjoyed playing cards and dominoes at the Wanette Senior Citizens.

To order memorial trees or send flowers to the family in memory of Virgil Larman, please visit our flower store.