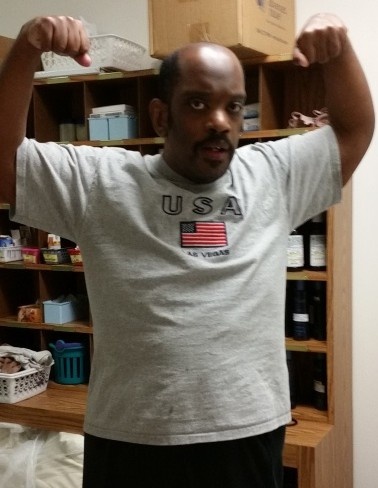 Wesley Jevon Henderson departed this earthly life, both peacefully and quietly on August 23, 2020 in Oklahoma City, Oklahoma, leaving all the pain behind.  Funeral Services are scheduled for 11:00 AM, Saturday, September 5, 2020 at Wadley’s Funeral Chapel.  Interment will follow at Hillside Cemetery in Purcell, entrusted to the care of Wadley’s Funeral Service.
Wesley was born on December 31, 1971 in Oklahoma City, Oklahoma to the union of Wesley J. D. and Paula Marie (Hudson) Henderson. He grew up in the OKC Metro area and attended Midwest City High School. Wesley was of the Baptist faith, and  enjoyed shopping, music, food, and sports. Wesley's favorite music was blues, and  B.B. King was his favorite blues artist. He was quick to sing “The Thrill is Gone” to Aunt Anita as he played his guitar for her. Wesley’s favorite foods were hamburgers, french fries, and anything sweet.  Wesley had two names for his Aunt Anita.  When she cooked sweet potato pie and white cakes, Wesley referred to her as “Momma”, but when she didn’t cook and would treat him to a large hamburger combo and some cookies from Whataburger, McDonald’s or Sonic, he would call her “Auntie”.  Another favorite was honey buns and cokes from his favorite cousin, Nicole Rose, which he called “Sister”.  Wesley was the beautiful bright sun, a full moon, and a sky of shining stars in the eyes of his mother.
Leading the path and joyfully waiting with open arms were his mother, Paula; as well as his older brother, Christopher Gerod Nero; both maternal and paternal grandparents, aunts, uncles, and cousins.
Wesley leaves behind to cherish his precious memory, his father, Wesley J.D. Henderson and wife, Jean of Longmont, CO; younger brother, Ali of Alaska;  five nieces, one great niece, one great nephew;  his aunts, Etta L. Shropshire, Clara E. Overstreet, Dimple M. Dillard, all of Oklahoma City, Mary K. Brown of Midwest City, Sharon A. Thomas and husband, Scott of Wynnewood,  Anita E. Gresham of Norman, Willa M. Graham of Pauls Valley, and Omi Faye Hudson of Norman; his uncle, John McNeil of Wynnewood;  his great aunts, Madge Lee of Atlanta, GA and Darlene Polk of Purcell; many cousins including a devoted cousin Nicole Prince Rose of Del City, and his family of many years at Reliant Living Center in Oklahoma City.

To order memorial trees or send flowers to the family in memory of Wesley Henderson, please visit our flower store.