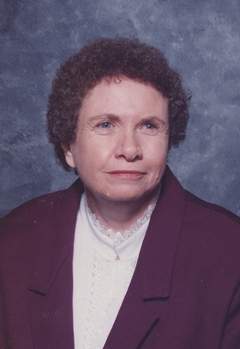 Wynema was the youngest of 5, born August 29, 1932 at home in Woody Chapel to Jake and Sabie Lou (Bagwell) Garvin. She was raised on a dairy farm, and started her schooling at Washington. Wynema graduated from Purcell around 1950. She married Jim Landers in 1954 and lived in California, Tennessee, and back in Oklahoma while Jim was in the Army. Wynema had her first son, Jim in 1958, and her second son, Jerry in 1960. She and Jim parted ways in 1967. Wynema worked for Pritchett’s Motel, White Café, Davis Café, The Pink Poodle, Chickasaw Hills, and then in housekeeping for the Purcell Municipal Hospital. She met the love of her life, John Wesley Bucher. The couple was engaged to be married when John passed in 1977. Wynema loved dancing, and taking her kids to John’s cabin at Lake Texhoma. She also enjoyed travel, especially Branson, and spending time at church and with her friends. Wynema was baptized at the age of 17 at Union Hill Baptist Church. She was a member of the Bethel Baptist Church.

To order memorial trees or send flowers to the family in memory of Wynema Landers, please visit our flower store.